Layers of “Autism” - from inside to outside

Those of us who frequently discuss autism with people we meet, quickly find that most people’s picture of what it is to be autistic is seriously inadequate and out-of-date.

There are many ways of understanding why this might be so - the oppressive power of the medical model, the largely inaccurate depiction of autistic people in the media, the general human tendency to stigmatise difference/otherness…

What I want to focus on here is the idea that most people’s idea of autism is overly focused on observable behaviour rather than on what it is like to be autistic “on the inside”. Not only that, but the behaviours that most people associate with autism are likely to be the ones that are selectively noticed on the basis of neurotypical priorities and concerns, rather than through genuinely curious & open observation. Worst of all, perhaps, many of the behaviours commonly associated with autism are not features of autism at all, but are a mixture of masking processes, compensatory/ survival strategies, mental illness symptoms, etc…

So it’s useful to distinguish at least the following four layers when describing the reality of being autistic: 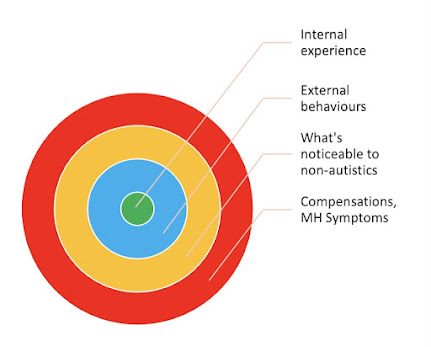 1.       The internal experience of being autistic, how autistic people process the world. For instance:

2.       The external (behavioural) reality of being autistic, the outputs of the inner processing. For instance:

3.       Behaviours noticed by non-autistics, the differences that are of concern to them. For instance:

·       Failure to initiate or respond to social interactions.

·       Deficits in understanding and use of gestures

·       Highly restricted, fixated interests that are abnormal in intensity or focus

·       Hyper- or hyporeactivity to sensory input

·       Unusual interest in sensory aspects of the environment

4.       Compensations, Survival Strategies, Mental Health Problems/Symptoms arising from the struggle to survive in a world ill-adapted to autistic needs. For instance:

They may have some distorted notion of Layer 2 (healthy, functional behaviour from the point-of-view of autistic subculture), and only the vaguest notion of Layer 1 (the true inner reality of what it is like to be an autistic person).

There’s a lot of work to be done…

Popular posts from this blog 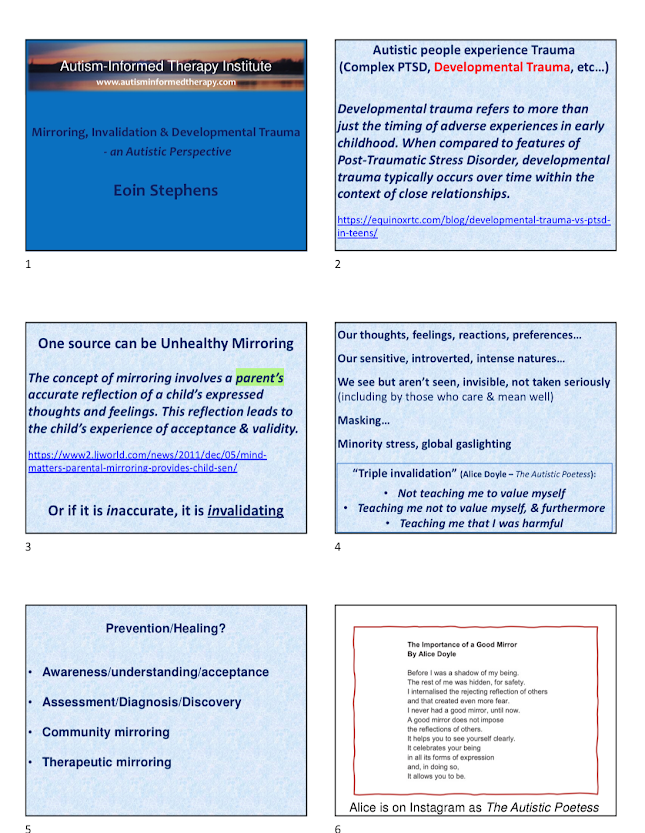 For this blog post, I'm posting a recorded presentation I did for a fundraising event on 10th April run by Autistics for Ukraine (see here for more information about the event). The topic of the presention was, as above, "Mirroring, Invalidation & Developmental Trauma - an Autistic Perspective". Here is the video (about 18 minutes):   Here are the slides from the presentation:   Alice Doyle's poetry can be found here
Read more

February 03, 2021
What is Autism-Informed Therapy? Autism-Informed Therapy is simply therapy that takes autistic neurodivergence into account, and adapts to the particular ways autistic people process the world. Given that therapy is a social/interpersonal setting, particular attention should probably be paid to non-typical ways in which an autistic client may process, and interact with, the social world. Different therapeutic approaches have their own assumptions and norms (both explicit and implicit) about interpersonal interaction, which might not be helpful to neurodivergent clients such as autists. (Whether these norms are necessarily even helpful to all neurotypical clients is another question). Therapists also need to make allowances, up to a point, for different preferences with regard to practical communications outside of sessions (setting up or cancelling appointments etc). Sensory aspects of the therapy setting should also be given consideration, as sensory sensitivity is an issue fo
Read more